Posted at 08:33h in City Partnerships by metrolabnetwork

The strengthened partnership came together as part of a effort in Cleveland to drive research, educational opportunities, and economic growth in internet-of-things technologies. These technologies will create efficiencies across sectors and industries, but will have particular impact on the economy in northeast Ohio, which is strong in manufacturing and biomedical and life sciences. IoT will also have a major impact on local government operations, sustainability and resilience. 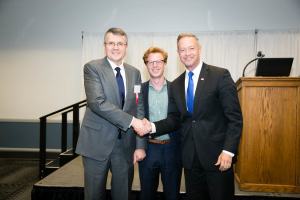 The IoT collaborative is still in early stages- it was only announced on Friday, May 5th. But we can already see that the partnership reflects a few simple characteristics we see in the most successful partnerships between universities and local governments: strong civic institutions; a commitment to place; and an ability to prioritize collaboration over competition.

Commitment to Place. Clevelanders care deeply about their city and the faculty at Case Western and Cleveland State are interested not just in advancing science, but in advancing innovation, economic growth, and government innovation in the region. As cities continue to move to knowledge-based, technology-driven economies, universities will increasingly play this vital role as drivers of growth. But it is difficult to harness the assets of universities without an interest in partnering with local government and focusing on civic and social priorities. It is encouraging that the Cleveland area has so many committed stakeholders at its local universities.

Collaboration over Competition. It’s no secret that universities compete for money, students, notoriety, and championships. Universities frequently work together, but it can be difficult to align the plumbing — data processes, IP rights, etc. As part of their IoT partnership, Case Western and Cleveland State signed a memorandum of understanding and have begun to work out the tedious but critical details that allow for robust collaboration across universities. Their partnership will draw on their unique assets: Case Western as an internationally-renowned research university and CSU as a public institution with deep knowledge of local issues and a strong connection to the local workforce. These complementary profiles will enable a synergistic partnerships as the universities collaborate on the IoT initiative.

We are proud to see the partnerships between local governments and universities thrive and are thrilled that Cleveland State is now a part of MetroLab.